This is really not a big deal to be honest but to some it will. It's all about the price with this shaver and it will do the dang job well if you keep consistent on your shaving.  For the majority of us this is easy to do because we shave Monday through Friday, skip Saturday and  end up shaving Sunday for church or just because it's NFL Game day and we have to look our best for our favorite team to win.
Feature List

Why Choose the Norelco PT730 Razor?

The Philips Norelco PT730 is an oldie but goodie and is at the right price range. This shaver is as basic as you can get and is meant for guys who shave daily and at most let their hair growth go for 2 days.  Once you get into that 3 day range you will notice a bit of spots you will have to go over a few times.

You get my point,  if you need an affordable way to shave that doesn’t empty your pocketbook at every turn, the PT730 is the shaver for you. With the rotary blade system, the PT730 is perfect for close shaves and can even be used on your scalp if you are a fan of the bald look! 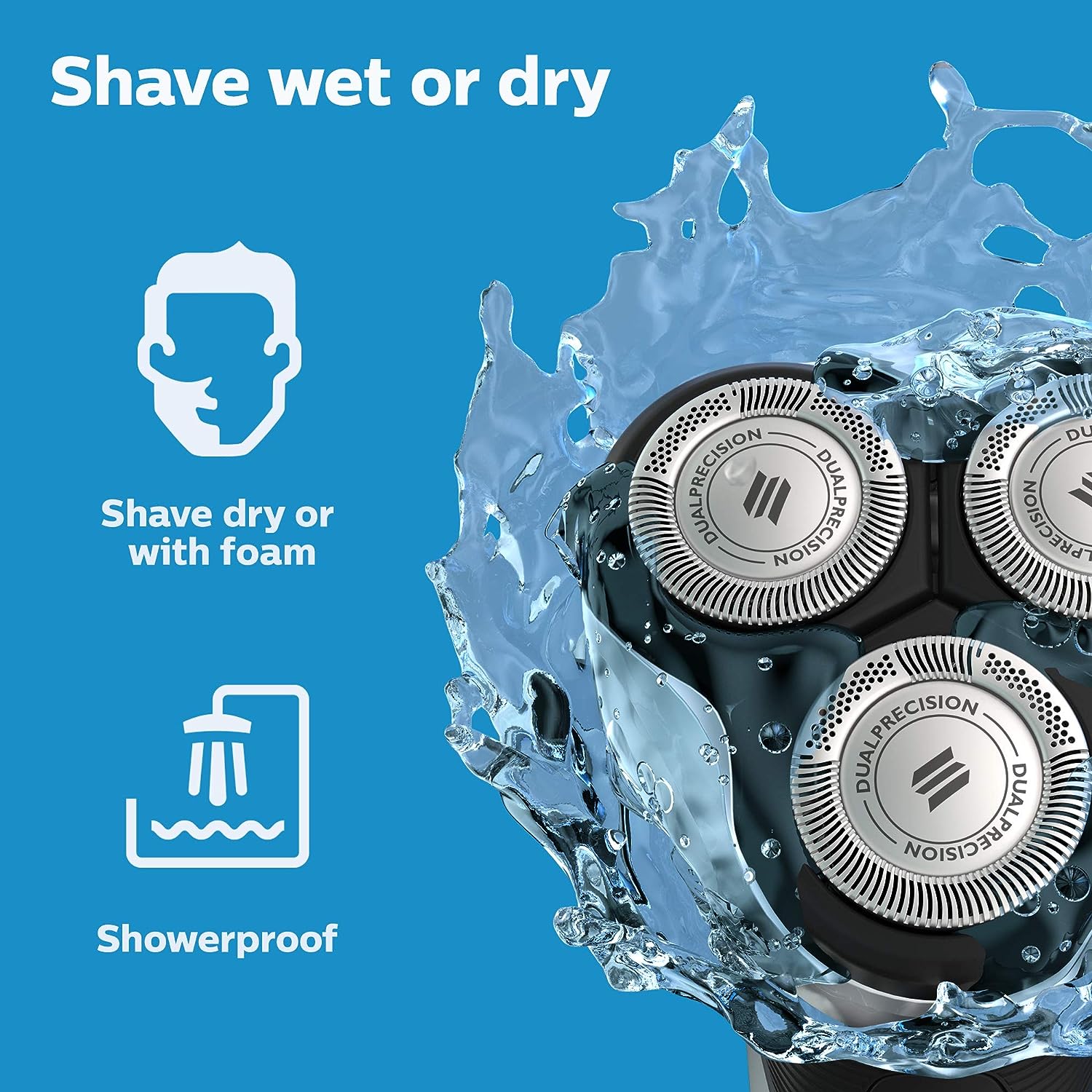 What Are The Key Features Philips Norelco PT730

Historically, a major complaint of electric shavers is that they don’t shave as close as a safety razor does. Listen up, because Philips Norelco has worked hard to improve technology so that their electric shavers work at least as well, if not better. Key features include:

For the price, the PT730 has a nice variety of additional features. Although this shaver is intended for dry shaving only, clean-up is a snap. Place the heads under running water to clean, or use the brush that’s included for further cleaning. Now If you are looking for a shaver that is 100% waterproof and can be used in the shower you will want to look at the Norelco PT810 Model.

How Does it Compare to Other Shavers

The Philips Norelco PT730 is a centre model of Norelco’s lower-end electric shavers. It is the least-expensive shaver to offer the Super Lift & Cut and Dual Precision technologies and a trimmer. But it does lack a great deal that more expensive models have. For example, the AT model of this series feature AquaTec, which allows for wet shaving. And the PT730 takes eight hours to fully charge compared to one hour for the higher-end shavers.

What Customers are Saying…

Overall, customers who bought the PT730 were reasonably happy with their purchase. At first, there is some question about its ability to shave closely. But in time, owners noticed that their skin or facial hair “got used” to the shaver and found that it worked much more satisfactorily after that. So definitely give it some time to break in as that is when most really noticed it was shaving a lot closer than out of the box.

Even the people who were a little disappointed with the shave they got thought that it would at least cut down on the amount of shaving they’d have to do with a safety razor.

It will feel a bit cheaper made than the old school versions. Well material has changed 10 years later and it is lighter. Don't just the book by its cover, for the price it does the job.

Finally…is it Worth the Money?

Well, the reality is that this razor doesn’t actually cost a whole lot anyway. At such a cheap price on Amazon, the Philips Norelco PT730 isn’t going to bleed dry your budget like modern safety razors can. And with a 45-day money-back guarantee, you have the security of knowing that Philips Norelco’s got your back on this.

The bottom line is that the PT730 Razor is exactly what it looks like – an affordable electric razor that delivers an effective shave and all at a reasonable price.

Thank you for reading. I hope that you found it informative.

Click for Best Price
HeadBlade S4 Eclipse: A Cool Way To Shave Your Head With A Razor
Panasonic ES-LV81-K Arc 5 Has Everything You Need
I put together various reviews on Electric Shavers out there so other men will have the information they need to purchase the one that is right for their needs. If you have any questions please contact me

Get started for free today

It is very easy to get started with our design kits, just give it a try, today!
Check our privacy policy on how we collect and process your information.
This website is a participant in the Amazon Services LLC Associates Program an affiliate advertising program designed to provide a means for sites to earn advertising fees by advertising and linking to amazon.com. Amazon and the Amazon logo are trademarks of Amazon.com, Inc. or its affiliates